You Say it’s Your Birthday 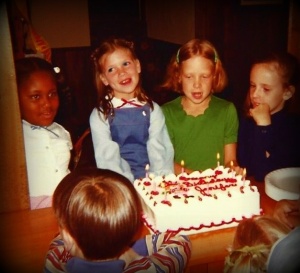 Aww, shucks. My 8th birthday party. I’m in the blue jumpsuit, soakin it all in.

I’ve always loved birthdays. I don’t know if it’s because my parents made such a big deal out of them or because I received a lot of attention on that glorious, cool October day.  Or it could be the presents.  Most definitely the cake.  Fluffy, white cake lightly topped with whipped, white icing is on the top of my special-occasions dessert list.  I never bake it at home or else I’ll end up like Miranda in that episode of Sex and the City where she’s bending over the trash can, eating the sugar slab she tried to throw away, then calling her BFF Carrie to declare she needs to check herself in at the “Betty Crocker Clinic”.

And let’s not forget the actual celebration.  On your birthday you can pretty much plan whatever party you want, theme, location (within reason), and the people who will help you celebrate.  As a child I had backyard parties, slumber parties, and fiestas hosted by Ronald McDonald as well as Billy Bob (gigantor grizzly bear character/banjo player for Rock-afire Explosion at ShowBiz Pizza Place before Chuck E. Cheese kicked his furry butt off the stage). 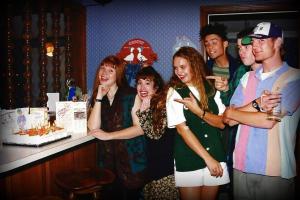 Aww, shucks. My 20th birthday party. I’m in the weird multi-colored vest, takin it all in.

As an adult I’ve had patio parties, karaoke parties, girl’s nights out, and fiestas hosted by, well, myself.  As a bit of a control-freak when it comes to parties I’ve never let anyone throw a surprise one for me.  Not that it couldn’t happen, a-hem, but it’s terribly unlikely.  Last year I had a house party where everyone brought a dish to share and their own booze.  It was low-maintenance and fun as hell, supposing hell is fun, especially since my good friend Chris set up a light show and played DJ all night.  My favorite part of the evening was when I looked over and he was horizontal on the tile floor, laughing hysterically.  I love seeing my peeps have a good time. 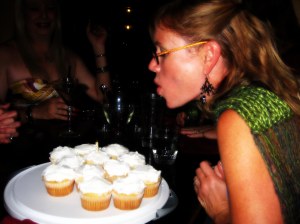 Really I think that’s the best part about birthdays– taking a moment during the festivities and appreciating those rallying around you.  Did I also mention cake?

What was your best birthday ever?

One response to “You Say it’s Your Birthday”