I just took a road trip back to the motherland (Tennessee) with my son Ian. He usually has his ears plugged into his music via iTunes collection on iPhone and cushy headphones. “I’m gonna listen to some music ok?” He always tells me before going into his music world. Because god knows he cannot hear me once that happens.

He appreciates a pretty decent range of genres for an 11-year-old. Lately he has been into Rhett & Link, YouTube stars who create some pretty humorous videos and songs. My favorite is the one about OCD because I can relate to wincing when a chip bag is opened from the wrong end or one blind slat is flipped the opposite way.

Ian usually shares what he’s listening to and loves to sing the songs to me, especially if there’s a rap bit. He’s got a great memory (multiplication tables excluded) and can repeat lyrics quickly after he hears a song a couple times.

He knows my complete adoration and need for music as there is some sort of speaker in every room in the house. So his love of music is well, music to my ears. But he has still not grasped the importance of appreciating The Beatles.

My brother Art and I spent hours and hours of our childhood in the basement listening to our parent’s old 45s. Thus a lifetime of Beatle love was born.

Halfway into the road trip Ian didn’t have his headphones on and wanted to just sit quietly next to me wondering if we were there yet. He needed a break from his electronics. Bob Dylan was echoing out of the car speakers.

“Sorry you gotta listen to my hippy music,” I said half apologectically.

He shrugged under his downy blanket.

“Do you know what a hippy is anyway?”

“Someone who drives a van covered in peace signs and does drugs?”

I explained to him what a hippy was. How their culture came from a revolutionary movement during a time of war and unrest. He wasn’t fidgeting or distracted. He was listening to me. So I decided to take this time while we were encapsulated in the car together to teach him a bit about history. Musical history. 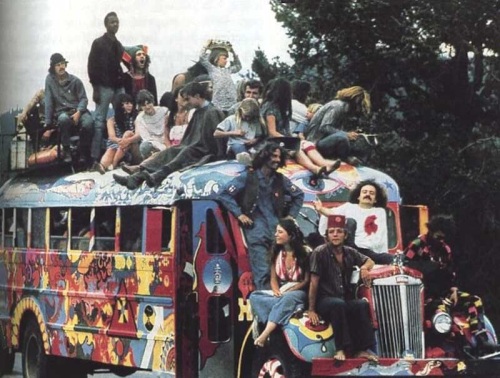 I have my Sirius satellite radio favorites at the ready and will switch between them depending on mood. Each time I landed on a great road-trip worthy song (mainly those that you can sing along to and don’t put you to sleep or drown you in their sorrowful lyrics) I took the opportunity to tell him a bit about the artist, the genre, and what was going on at the time.

When a Paul McCartney song came on I told him how each member of the Beatles had their own solo career and how I had seen Paul in concert back in the nineties in Louiville with his uncle Art and some friends. “Is Paul dead now?” He asked. I explained to him that Paul and Ringo are the two remaining Beatles on this earth.

I told him about grunge music when Nirvana came on. And what an integral part they played introducing the Seattle-based guitar heavy sound to the world. “What is he saying, Mom?”

I told him how I couldn’t listen to Stars by Hum when he was away from me because it reminded me of how much he loved that song when he was very little.

I told him about New Wave and early alternative when Morrissey’s melodic groaning flowed through the satellite airwaves. And how I got a speeding ticket once while rocking out to Pop Muzik by M.

I’m hoping he’ll remember some of what I explained to him. I don’t have old 45s for him to listen to (my bro took all those before I could protest). But perhaps he’ll raid my cassette or CD collection one day or download a Beatles song. And perhaps he’ll even remember the lyrics to Let ’em In the next time he hears it.

Back to the Mall

My parents were over the other night for dinner. After we chomped on tacos with black beans, chunky salsa, and jalapeños we began reminiscing. I’m not sure how the conversation started but we cruised back in time to 1980-something. To Antioch Tennessee where I grew up. We went back to The Mall.

The crappy thing is the mall where I spent so much time from ages 6-26 is no longer there. I mean the building itself is still there but the stores, the people, the smell of corn dogs and waffle cones is just a lingering memory. I think they are turning it into a college annex now. I’d like to go back and see what it looks like. Or perhaps I should just stay away and remember it as it was.

In the beginning the mall included a 3 screen movie theatre. Me and my brother tried to sneak into our first movie theatre rated R movie. But the ticket boy caught us crawling on our hands and knees right before we could enter The Serpent and the Rainbow. That was also the theatre were we spent several summers prior marking off our “Summer Movie Camp” cards. Every day of the week they showed a discounted movie for kids. It was the first time we got dropped off at the mall by ourselves. Our neighbor Jason would usually accompany us and his mom was so cheap she would have him stash cans of Big K sodas and Dollar Store-bought boxes of Jujubes and Chocolate Stars in his trench coat pockets. He shared.

The food court back then was not a myriad of ethnic culinary delights as mall food courts are now. I think the most exotic place was Picnic Pizza, owned and operated by a real Italian family. Why they chose to relocate to Antioch I do not know. My brother’s favorite place was Hot Dog on a Stick. He would get not one but two “Cheese Bars” which were huge logs of cheese on a stick, dipped and fried in batter. I did not partake in the infamous cheese bar but rather stared longingly at the various flavors tempting me from behind the glass at the Swenson’s counter. “That ice-cream is high” my mom said so many times. I think she only let me get their outrageously expensive ice cream twice before they turned it into a Sunglass Hut.

But she did occasionally let us buy candy from the Sears candy stand. Yes, Sears had a candy stand between Women’s Sleepwear and Automotives. You could smell the hot caramel and roasted nuts five sections away. There’s something mildly rebellious about eating confectionaries while shopping at a department store.

JCPenney’s had a hair salon and that’s where I got my first real ‘do and met Carson, my hairdresser for the next twenty years. I went from blunt bangs and long mane to the female mullet. My brother was so jealous. “Why can’t I get a cool haircut?” he demanded. Now he laughs at old photos of me.

Later a shoe store called Journeys opened and provided me and my brother with our first trendy skateboarding shoes and me with hours and hours of staring at their top salesman. His long black hair and skate punk style left me completely star-struck and unable to utter more than a quivering “No, I’m just looking” anytime I actually went into the store when he was working.

I watched the mall change during those three decades. The flowing fountains and draping greenery changed to ceramic brick to accompany room for kiosks. The sunken dining area of the food court leveled to make room for more ever-changing food stands. The movie theatre demolished and turned into a Dollar Tree. The arcade made it through with several name changes. 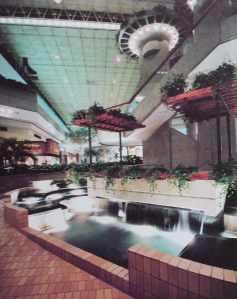 This is the mall I remember. One of the only photos I could find of it on the internet.

And I have so many memories from those decades. Begging for throwing stars from Oriental Way. Sitting in swinging basket chairs at World Bazaar. Watching puppies through the plexi glass cages at Pass Pets. Getting my ears pierced at Claire’s. Buying my first pair of parachute pants at Chess King. Buying my first school dance outfit at Deb’s. Hanging out on a Friday night and seeing that popular metal-head/punk guy named Wolf and wondering what the hell his story was. Visiting my first openly gay friend who worked at Wilson’s Leather. My own retail career at Wolf Camera and Video for 3 years.

I’m glad with the help of my parents and my brother I can relive those memories. I wish I could go back to the mall and see it just as it was back in 1984. What a trip that would be. But it will just have to exist in my mind.

So I make new memories at another mall where I have taken my son here and there for the last 11 years. We spent the day there the other day sipping lemonade and smelling candles we couldn’t afford and racing each other on the Fast and Furious arcade game. I hope he will remember in the years to come. God willing I hope I do too.