This morning on my chilly bike ride I saw her.  Again.  She is usually near the park, but today she was a bit farther north, just before the tunnel.

On happy days I ignore her dark, dead eyes then roll my own bright blues after I pass her.  She never says hello, never a word.  I don’t know how it is humanly possible for someone to walk that slow and not fall.  Among the bikers and joggers and roller bladers and parents pushing strollers there she moves at a snail’s pace.  Except a snail has a purpose behind its travel.  I gave up smiling and saying good morning to her long ago.  And those hats!  A different one every day.  Neither too fancy nor too casual, yet totally impractical to moving about on the trail.

And her clothing.  It’s as if she’s dressed for a day at an open market someplace I’ve never been but only seen on TV.  Long, flowy skirts and tunics.  Even when it is sweltering outside (which it is here half the year) her entire average-sized body is fully covered.

But it’s not just her outward appearance that shakes me.  It’s what I feel when I see her.

I know when she is up ahead on the trail.  Not just because of the cadence of her mechanical walking, but because of the energy.  Whatever I am feeling I know she senses.  On my happy days I try to send her light or at least surround myself with irradiation so she may become momentarily blinded.  But when I pass her with this glow she does not falter.

On my sad days (which thank god are not often anymore) I also avert my eyes to hers.  But I try not to direct this melancholy towards her.  Instead I feel she knows this.  She gives no solace yet she takes no energy.

But this morning she was not walking.  I saw up ahead a figure standing beside the tunnel, looking out onto the horizon.  I thought to myself what a beautiful photograph that would be.  The figure posed better than you could tell a model to pose while looking outward.  A shadow before it stretching out toward the early morning sun.  When I came closer I saw that it was her.  And like usual when I see her there is no one else around.

And like usual she did not look at me, did not speak a word, did not even seem to be breathing.

I biked past and just a tad more north where I always turn around and grab my water bottle from its nest underneath my ripped, cushioned seat.  When I got back to the tunnel she was gone.  I didn’t even see her anywhere else on the trail as I made my way back towards home, cold sweat on my forehead I had to wipe off on my little sissy Florida gloves. 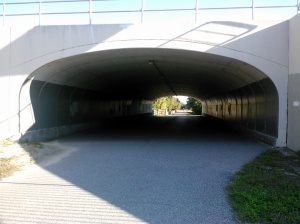 I have always wondered if she is a ghost.  I could ask one of my occasional biking companions about her but she is never there when I have company.  And to be honest I don’t really want to know.  She is my mirror.  Although unsettling, she reminds me to keep peddling and singing and sweating no matter what dark eyes try to pierce inside.

2 responses to “Just a Shadow?”