Today marks the last official day of one of the greatest events I’ve personally ever experienced: Disney World’s Epcot Food and Wine Festival.  Epcot includes a “World Showcase”, or the world within a theme park.  Every few steps you enter a different country, complete with restaurants, shops, topography, architecture, and street musicians representing said country.  I am not a major theme-park person, mainly because of the crowds and possibility of being coaxed into getting on a ride that will unearth my distressing claustrophobia.  But almost every year since 1999, God, Universe, and Paycheck willing, me and hubby make the short trek to Epcot.  We missed one year for some reason and I felt a pang of emptiness for months and months afterwards.  I think I’m still having after-effects.  Although this year just might have filled that void forever. I will get to those details in a few.  But first:

What you must have, understand, and appreciate before entering the fest: 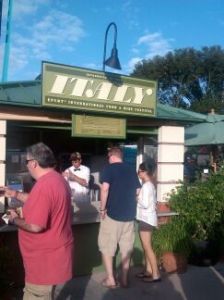 They were the friendliest of all the kiosk servers. I think I even got a marriage proposal.

I don’t mean to dampen the excitement of this splendiferous occasion by spouting off rules.  Because it is such an occasion.  For me, at least. Those were just suggestions for if and when you decide to go.  Of course you’ll have to wait til next year.  I’m already counting the days. 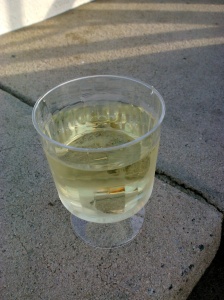 Big pour on the stoop.

Anyway it was a wonderful day.  The weather was perfect.  The food was the best ever since 1999 when Mexico had those warm, cheese nips.  It was seafood-heavy this year which is right up my alley since I don’t usually eat mammals. 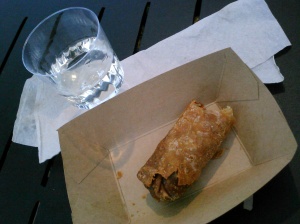 I got crazy and mixed– Japanese sake and Moroccan chicken roll.

Singapore’s lemongrass curry chicken and seared Mahi Mahi with “Singa” sauce rated in our top 3.  The other toppers included the chicken roll from Morocco and get this: the Trick’n Chick’n curry and Chili Colorado from the Terra kiosk, which was all vegetarian.  Even my meat-eating hubby thought it was heavenly.  And their Vegan Vine Chardonnay was probably the best (though not the biggest) pour of all.  There were 30 kiosks and 22 countries represented in all.  Also a cheese cart, coffee cart, brewer’s collection, and desserts & champagne kiosk.  The Moroccan baklava and mini Belgium waffle with warm chocolate ganache melted in our mouths.

Yes, it was crowded.  And yes, Spaceship Earth stopped in the middle of the ride as rides always do when I get on them.  But I took it all in stride.  When you’ve got a delicious breeze, culinary delights, and booze involved everyone’s happier, right?  And I only heard one kid cry.

The competition proved a success.  No blisters formed.  Made it around the world twice.  Even had room for multiple desserts.  Saw a woman in a muumuu.  Got choked up during the evening’s fireworks as usual.  Woke up with a slight hangover.  Ready to do it all over again next year.

2 responses to “An Empty Stomach and Good Walking Shoes”