I have the luxury of sometimes joining my son for lunch at his school.  The first time I did this I was quite nervous as the protocol for being a cool mom changes every year.  This year especially since we went from a private school (where we knew everyone) to public (where aside from two kids from the neighborhood every other face was a stranger).

I have learned since that first time it is not cool to wave wildly at a kid I do know and yell out “Hieeee!”  Nor is it cool to spill ice-tea while trying to balance a tray of food and grab a spork (or foon) at the same time.  I have also learned that cafeterias today smell exactly like they did in 1983.  Upon entering, mass-produced comfort food, industrial-strength cleaner, and a hint of Crayola marker wafts through the lunchroom and into the nostrils.

The food is actually way better than it was in the ’80’s and ’90’s, at least at this particular institution.  I’m not sure what I ingested in my youth, especially if it was encased in a bun.  Today I had a chicken/soy caesar salad with actual romaine lettuce and a rather crisp, slightly sweet green apple.  My son did not have the quintessential Sloppy Joe, but a rather sloppy slab of lasagna.  He proceeded to inform me he’d never had lasagna before and I felt a small pang of guilt for never including it in my small dinner repertoire.  He ate the entire thing and a couple tiny bites of his peas, per my nagging request. 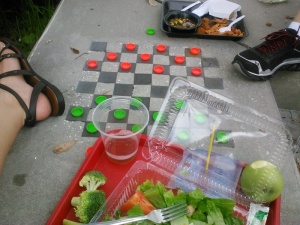 One of our first school lunches together this year. There was a mad game of checkers going on in between bites.

We ate outside under a live oak as a rare chilly breeze staved off sweat and buzzing insects.  Parents aren’t allowed to eat inside the cafeteria as there are not enough seats at the tables.  We had a nice conversation (as they tend to be now in his ninth year of being a child) although it was heated at first as he begged for five dollars to buy a Rainbow Loom bracelet from another kid.

“It’s still a rip off.  Tell the kid you won’t go higher than two bucks.”

“Then ask him who else is gonna pay that price?  I bet no other kid has five bucks to spare for just one rubber band bracelet.”

“They go for ten bucks on Amazon, Mom.”

“This conversation is making me upset.  Can we please talk about something else?  I came here to have lunch with you, not haggle over obscenely priced jewelry.”

So he finally let it go and proceeded to tell me he fell asleep in class.  Then he asked how my day was.  Happy sigh.  I gave him a run-down of my usual– biked the trail, walked the dog, laundry, chatted with grandma, started some writing.  Then I asked him if he could tell me what the bully looks like.

The bully has put squished grapes from the cafeteria floor as well as ketchup in my kid’s soup and salad at various lunch times.  I want to strangle the bully.

Of course, I say to myself.  Buzz cut.  They are always the ones.

As lunch nears its 30 minute mark I notice my son’s class lining up outside to make their trek back to class.  I tell my kid I’ll take care of throwing the trash away (as I now know it is also not cool to walk with your fourth grader to the rubbish area).  He gives me a pathetic look and pleads, “Four dollars, Mom?”  I look through my cash and see that I have only one dollar bill and a five.

He sighs in resigned desperation and I coolly nod to him as he joins the class.  I scour the line for a glimpse of the no-hair bully.  That one has medium length blonde hair.  Nope.  That one has short hair but it is still present.  Nope.  Ah, there he is.  Hair shaved like an incarcerated mass-murderer.  Skinny little goofy-ass kid.  Even though I have my sunglasses on I look directly at him and give him an eat-shit-and-die-look.  Hell yeah, that asshole saw it, too.  Bet he’s a little shaken.  The kid looks right at me and freakin waves!  All Eddie Haskell-like!  I look away and roll my eyes to the December clouds.

As the class line disappears and I gaze down at my new sturdy Croc flip flops I wonder if the bully will continue to haunt my son.  Or will he heed my undeniable shade-covered warning?  You mess with my son I mess with you.  You have no idea what a really crappy Sloppy Joe tastes like.

The Wheels on the Bus 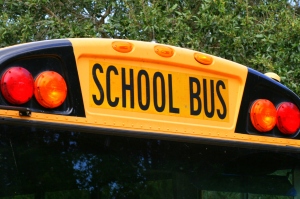 So this past week I chaperoned a field trip for my son’s 4th grade class.  This is his first year in public school.  The past years in a private Montessori school also included such trips.  Difference being in private school the parents drove (with proper identification).  In public school the mode of transport to and from the trips is the county’s big, yellow school bus (as a chaperone proper ID along with hair sample and DNA testing required).

Now I hadn’t been on one of these mustard-hue, boxes of mayhem in I-can’t-remember-how-many years.  Must have been since the early ’90’s.  I was the only senior standing in the freezing cold, 6:15am, with straight-out-of-the-shower wet hair at the bus stop.  Scattered around me were a handful of freshmen, a few sampling of sophomores, and one or two financially strapped juniors.  Especially embarrassing since my younger brother had his own car.  But since his drum-core band practice sometimes took place at odd hours, I was forced to ride the bus whenever I couldn’t find a ride with anyone else.  Which was most of the time. 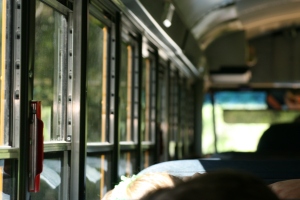 But those were the days of the non-amusing treks to school and back.  Most kids took naps, drooled, or listened to their Walkman.  Let’s rewind to a happier time: the end of elementary school and the early ’80’s.

There was this older, burly African-American kid who lived down the street from me who I think failed about two grades.  I don’t think we said two words to each other but he offered the greatest entertainment (and memory) I could have hoped for on a bumpy bus ride to educational semi-bliss.  The guy always carried a boom-box (also known as a ghetto blaster) on his shoulder.  He propped it onto the top of one of the doo-doo brown vinyl seats and blasted us with Doug E. Fresh, Whodini, and Michael Jackson.  We loved when Michael’s Beat It rolled on the tape deck.  It usually happened about a minute before pulling into the school lot.  We excitedly waited for the “just beat it/beat it” chorus line, singing the Uh! in amplified unison while pumping our fists to our sides. 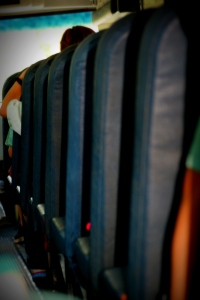 Later in middle school times were only slightly as happy-go-lucky.  There was a hierarchy to sit in the back, and that was usually saved for this skater kid who let the older boys pour Laotian hot spice into his mouth.  As the wheels on the bus spun round and round we bounced on the hard, torn benches with nothing to keep us from banging our heads on the half-open windows or each other.  There was no boom-box music but our driver, Miss Eadie, played top 40 hits from the vehicle’s worn-out radio and blown speakers.  She was a tough, wiry broad who sounded like she’d spent her life smoking and living in the local trailer park.  I felt safe in her care.  Once we passed a convenient store being held up (did I mention I went to middle school in the ghetto?).  As we heard shots ring out Miss Eadie in her raspy, redneck accent yelled, “Everybody DUCK!”  We did not hesitate. 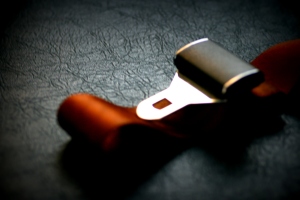 So as I entered the bus with my own son for this field trip I passed the Wilford Brimley look-alike behind the wheel and scoured the rows for a place to sit.  I found the very back seat to be empty, which surprised me.  No fighting for it.  No hot spice needed.  There was a slight motor oil smell throughout which greatly differed from the scent of activator and Aqua Net of my youth.  The seats were exquisite– a pleasant blue color, no rips, and almost comfortable.  Each one had a back high and soft enough to double as an “air bag” for the passengers behind.  And what were these attached to each bench?  Seat belts!  I clicked mine into place after having to extend it to fit my non-4th- grade-inch waist.  I felt as if I were flying to Turks and Caicos. 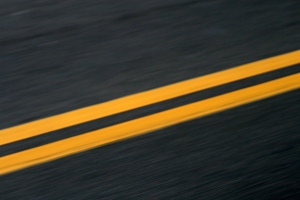 There was no music on this flight.  Just the sound of children chatting, bopping each other on the head with water bottles, and singing the latest advertisement jingle for Subway.  The road noise and engine hum was louder than I recalled but it was bumpy like I remembered.  And the wheels went round and round propelling us forward to other adventures, memories, another era.