Kitty was a stray.  I found him roaming a block from my childhood home.  He was on the smallish side, with yellow eyes, and short, jet-black fur that felt like velvet.  So that’s what I named him.  But we called him Kitty. 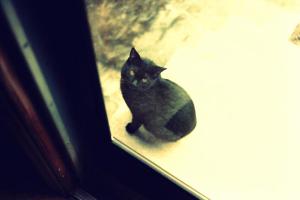 He was one of three strays we had at the time—the only time we ever had pets of the furry, four-legged kind.  I was eight years old.  My mom didn’t want pets in the house so they stayed outside.  One was all white and given to me by my grandparents after I’d found her lurking around their house.  The other, who was found scampering about in our neighbor’s yard, had black and white spots, and Kitty of course was solid black.  It was the perfect combo except Kitty was always trying to steal the other cat’s food.  He was relentless in his efforts, even brash about it.  With little regard for poor Whitey and Spots he’d barrel toward their bowls as soon as he scarfed down his own Kibbles n’ Bits.  There was a lot of scolding him, and I began to wonder if I should have carried him down the street and into our lives. 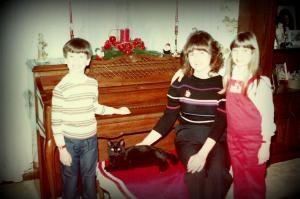 One night as we pulled into the driveway in our Caprice Estate station wagon, a big white cat was carrying Whitey by the scruff of her neck.  Their eyes flashed toward us and then they were gone.  Whitey’s mother had traveled 30 miles to come get her daughter.

And then there were two.  Kitty still raced to eat the other cat’s food when he was finished, but with a little less aggression.  A week later Spots took off with a flirty calico who’d been peeking at him through the slats in the redwood fence.

Since Kitty had no more competition he took his time eating, and slowly turned into the sweet pet I’d dreamed of and begged my parents to let us keep.  He didn’t scratch, didn’t shed, and scrunched his little toes when he napped.  My dad made a cat house for him and we painted it yellow and filled it with a soft blanket.  Sometimes on special occasions Kitty was allowed in the house to play for a bit.  He crawled under my brother’s bed when we played hide-n-seek.  In the living room he was only allowed to sit in this one pink swivel chair, which he did so obligingly.  There were a few times he was even allowed to cuddle with me in my queen-sized bed.  His purrs were so loud when you stroked his smooth fur.  He chased us in the backyard and climbed the maple tree my brother and I swung from like monkeys. 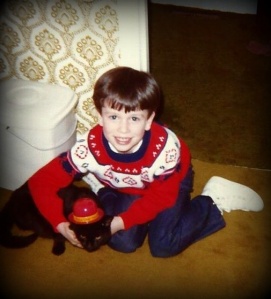 One afternoon when I came home from school Kitty was nowhere to be found.  I looked everywhere- all around the house, inside and out.  I looked in the creek behind our house, asked the neighbors, road my bike to the place where I first picked him up.  Nothing.  For two weeks I looked for him, called for him, prayed he would come back.  I had this sinking feeling he was hurt and needed me but I couldn’t get to him.  I held onto the hope that he scampered off to find another cat friend, went on an adventure, and was just taking his time getting back home.

On a Saturday morning while we were helping my dad in the yard two older boys I’d never seen before came over to us and asked if we owned a black cat.  They said they’d found one dead in the creek, about a quarter mile down.  We dropped our rakes and ran along the creek bank to it. 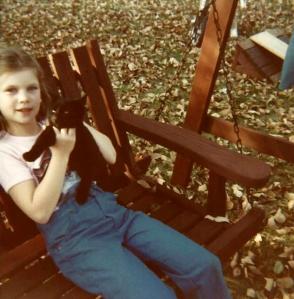 Kitty had been shot in the head by a BB gun.  I always wondered if those boys had done it.  We buried him under the maple tree and had a little service for him that afternoon.

I cried and bawled for hours, days, weeks.  I swore I’d never have another pet.  The emptiness, anger, and relentless sorrow I felt was too unbearable for me to put myself in that situation again.

Funny how resilient children are.  Funny how adults can be, too.

Filed under Picking Up Strays